Expand all Back to top Go to bottom

There are a lot of misconceptions, questions, and nuance around macronutrient ratios (something quite exhaustively harped on in keto circles) within the carnivore communmity. 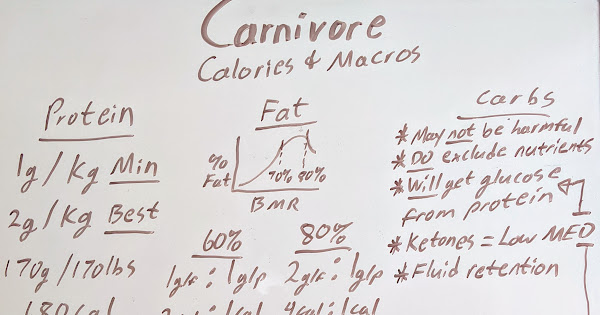 I wanted to break down a basic template (and my own macros) to illustrate a few principles. Firstly, let me say that the whole “if it fits your macros” is exactly what is wrong with “traditional keto” (aside of course from guzzling canola oil) – that is, getting caught up in manipulating “the letter of the law” rather than living by principles. In other words, it’s really easy to get caught up in fat bombs (lacking nutrients – more on this later) and pseudo-foods (bars, shakes, “keto” cookies, etc…)

Let’s start here. Robb Wolf, Gabrielle Lyon and others harp on this all the time (no reference needed, ready literally any of their blogs or listen to their podcasts). At a minimum we should be getting 1g / kg of bodyweight. In fact, you’ll probably feel much better if you’re getting 2g / kg (or 1g / lb) of bodyweight. For me, at about 170 lbs that’s 170g protein (680 calories).

To get a better idea of how this fits into the overall macro ratio picture we need to talk about fat. We’ll come back to protein in a minute.

Looking at the graphic above we see that our BMR peaks between 70% and 80% calories from fat. After that BMR starts to decline – albeit at a slower rate than it increased. Similar to one of the criticisms of carbohydrates is that when %fat creeps over 80%, not only does our metablism slow, but we’re missing out on other nutrient dense foods ources. In a non-carnivore example think globs of butter and coconut oil and marginal meat and / or vegetables.

In reality then, we’re looking for 80% or less fat (I’ll get to ketones in a minute by the way). If we’re looking at a carnivore diet, then we’ll want a minimum of 60% fat. For myself, less than that causes severe diarrhea. There’s also some threat of uric acid build up, though again, this is not a concern if the protein you’re consuming is getting used (see protein below, as well as carbs). It certainly isn’t cause for cocnern at the 2g / kg recommendation above.

Alright, so what do these percentages look like on your plate?

Doing some quick math, then:

I’ll let you know right off the rip that on an ligth/average day I eat about 3,000 calories and about once (somtimes twice!) per week I’ll smash 4,000 calories or more. In that case:

This come out to about 3g / kg; and I’m not worried (see below why). Clearly this is far above my initial recommendation of 2g / kg, but again, I intended this article to be a template rather than a prescription.

Notice that I flipped the fat percent to 70% as well. I’ve found this works best for me in terms of preventing diarrhea and still staying lean. Blanacing the macros is really nuanced that – honestly – I still don’t get right every day depending on my fasting protocol. Have you ever tried OMAD with 4,000 calories and 80% fat? LMK if you have and have not had diarrhea! (Also, see Robb Wolf’s many articles to the jist of “Longevity, are we trying too hard”)

Ah, yes, time to address the devil you know. Let’s be clear right off the rip, when I say “carbs”, I mean honey, berries, avocado, cucumbers, and maybe squash (“animal-based / carnivore-ish). Damn your sweet potatoes, and I better not catch you with rice (sorry Stan Efferding), and we need to start way over if you’re eating pasta and bread.

Now, I myself did do a [honey experiment]( /2020/carnivore-honey/) and didn’t find any ill effects. My blood sugar did spike more, but this was more or less predictable based on A) how fasted I was at the time of ingestion, and B) how much fat and / or protein were ingested with the honey. At any rate, carbohydrates may or may not be problematic aside from the clear water retention they may cause.

Much of the work of Paul Saladino and Ben Bikman suggests that excess carbohydrate fans the flame of insulin resistance, but the “cause” is more likely maladaptive fat cells (the result of excess linoleic acid).

As I mentioned above with fat being too high, one of the main detriments of carbohydrates are that they exclude other more nutrient dense foods. Maybe not a lot if you’re only eating a handful of berries per day, but referrencing things like “The Potato Diet.” In short, the bioavailability of nutrients in high-carb sources falls dramatically short of that of protein or fat rich calorie sources.

Coming back to uric acid and glycogen, your body will get glucose from protein – almost 50g / 100g. Ironically, that reference is to Diabetes Spectrum cautioning aginst overconsumption of protein. To which, I digress to the previous comments on linoleic acid and using said consumed protein – you know, by like actually moving and straining your body.

Lastly, a word on ketones. We definitely should not never be in ketosis – the biological state of producing ketones for fuel. Even it is for very short periods of the day or throughout the week; it doesn’t seem evolutionarily consistent that we’d always been in a fed (glucose rich) state. Rembmer the keto-neurosis of number chasing I mentioned earlier? I don’t believe there’s necessarily a benefit of constantly pushing ketones higher – at some point it is detrimental (ala DKA), barring a specific neurological condition. But, there’s hope in the middle. I think the MED (minimum effective dose) for ketones is pretty small; meaning a little fasting will likely get you most of the benefity. Conversely we reach a point of diminishing returns much faster than most people thing (see the graph at the beginning of this article).

*References for protein requirements can be found in my ebooks